We were planning for this trip for over 12 months and the main organisers were Alison & Jo, Navy veteran Alan Johnson’s daughters. It evolved from an initally planned one coach to:

Accommodation and access to key areas were logistical problems. The solution was a combination of a hired Chateau; 2 gites & 2 hotels with everyone issued with passes to allow us to move around Normandy sites.

We finally all set off with the majority electing to travel down and stay overnight in Portsmouth. It felt as if the adventure had started as we met up and had an evening meal together.

Tuesday 3 June – Portsmouth to The Chateau

Since the ferry leaves at 8.15 am it is an early start to be out of the hotel by 6.00 am – not much chatting taking place. Breakfast & lunch on the boat and then an hour’s journey to find the Chateau. Ray (Joe Withnall’s son) and John & Linda (Harry Gordon’s carers) didn’t disembark as quickly as the coach and were left to navigate independently rather than following in convoy. Both cars arrived at the village of Canisy (5 miles outside St Lo) to find this elegant 16th century castle. Very nice – but no sign of the coach. Is this the right place? No. Ours was the 19th Century Chateau de Montmireil which offered swimming pool, billiards room a 9 bedroomed Castle, 6 bedroomed Pavilion and the 4 bedroomed Cottage. Sounds wonderful. Not exactly. Shabby chic with interesting bedroom and bathroom arrangements – you had to walk through one bedroom to reach another; the attic bedroom had no safety rail; one toilet had plain glass for the top half; plaster was peeling off the walls.

Alison and Jo were mortified and Eric Glennon’s son was found in the grounds trying to book ANY accommodation in Normandy (not a chance – everywhere was fully booked). But after the first night we all just got on with it. It pulled us together as we did the catering, drank socially and make arrangements like ‘If the door is closed the toilet is in use – walk past without looking’.

We met up with Yannick & Claudie (the former Mayor of Hermanville and loyal friend of the Stockport group) as wreaths were laid by Jim Clegg at the Naval Memorial with Father adding his prayers for the sacrifices made by the British and Allied Merchant Navy. He recalled that as the next male child born after an uncle serving in the Merchant Navy had died at sea, he was named in his memory. We all moved on to Hermanville Cemetery where Tess was able to lay a wreath at the grave of her brother-in-law John McHugh who was fatally injured on D-Day and died of his wounds the following day.

This was, in effect, an American day. St Mère Église was the first village in Normandy to be liberated by the Americans on D-Day. It hosts the Airborne Museum – a French museum dedicated to the memory of American paratroopers of the 82nd and 101st airborne divisions who parachuted into Normandy on the night of June 5–6, 1944 and is probably best known for the model of a paratrooper hung by his parachute from the church spire during each anniversary commemoration.

Grandcamp-Maisy is the location of the Maisy Gun Battery that was only discovered in 2006. Maisy Battery was one of the largest German defensive positions in the Omaha sector on D-day. It had a huge role in defending the coast behind the Omaha Sector and at the edge of Utah Sector until It was taken by the US 5th Rangers. 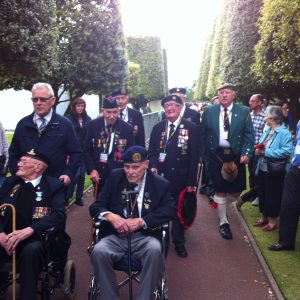 Omaha Beach and the American Cemetery is a solemn burial site of 9,600 American soldiers. The scale of the loss of lives cannot fail to move visitors. It was here that our group laid a wreath, with veterans parading and Jim Harkins (he had served with the Black Watch as a Regular and was an ex-Sergeant Major) acted as parade marshall, haranguing the veterans as ‘a lazy bunch of scruffy looking so-and-so’s’. Wrexham NVA Branch were also there and their Standard Bearer asked if he could join us, so he joined Steve at the head of our parade.  Steve recalls:

As we were getting somewhat ahead of the veterans, Jim told us in no uncertain terms “Slow down you’re not greyhounds at Belle Vue!”

It all added reality to the parade – but shocked many of the other visitors. They obviously weren’t aware of military authenticity.

This had been a busy time for the veterans and it was decided that with the difficulty of freely travelling around the area (gendarmes were at every roundabout and cross roads to protect the good and the great; The Queen was at Bayeux; Prince Charles was at Juno Beach; William and Kate were at Arromances; Obama was helicoptered in and out of Omaha) that we should have a more leisurely start and travel only to Arromanches for the Parade at 5.00 pm. Having the passes (for us and the coach) meant that we were waved through all the road blocks, which felt like we were royalty. I should add that these passes only arrived on the Saturday lunch time as we were going on the Monday. For Alison & Jo that added to the stress of organising the trip.

Before the parade veterans were invited to meet William and Kate and we have some lovely pictures of Jim Clegg and Wally talking to Kate. In real life she was lovely to look at and had the skill of making the veterans feel she was so interested in what they had to say. (It was noted that the equerry accompanying her was unable to extract her from her conversation with Jim.)

Aromanches was heaving and it was very difficult to move either before or after the Parade. Jo remembers her Dad having to get one of the top brass to let other naval veterans inside the cordon as their passes hadn’t arrived. After the parade  we had to get the veterans back to the coach and regular soldiers were on hand to help. Ray struggled with helping his mum Bertha as well as his dad and a sergeant offered to help Joe. Seeing his combat medals we asked where he’d served (Afghanistan and Iraq) and Joe – such a lovely humble man – said: “You must be brave, that will have been rough.” To which the sergeant replied: “No sir; you’re the brave one. You (Joe was in the Black Watch) had it rough.”

Back at base at the Chateux Mark & Jane and son & Harold Addie’s family joined us for a buffet meal. Despite our leisurely start it had been a long day.

Ver-sur-Mer is the location of the German Gun Battery of Mont Fleury with cannon and damage to the Bunker evident from the Naval Bombardment. This was targeting ships near to where Alan Johnson’s minesweeper was clearing mines on the approach to Gold Beach.

We then moved on to the B3 airfield at Ste Croix. This was constructed by a Royal Engineers Airfield Construction Group just after D-Day and Alan (Mac) Mackintosh, who was part of this unit, joined us. The group built a 3,600 foot runway and dispersal areas. Being a temporary airfield, its facilities were basic, but adequate. A fuel and ammunition dump was located near the airfield. It was used by RAF 144 and 146 Wing and was also used to evacuate injured soldiers, sailors and airmen to England. This was where Lesley laid a wreath in memory of her dad, Stan Weatherall, and Mike Davies laid the wreath for the RAF/ NVA. The mayor and villagers invited our group to refreshments in the village hall

The day ended at Bernières-sur-Mer and Juno Beach where Harold Addie and Eric Glennon were on Tank Landing Craft that brought in Canadian soldiers. A memory that stays with us all is of Harold walking along the beach with his two grandsons, in tears as he recalled his memories of that day to them.

The German Tower at Ouistreheim is known as The Grand Bunker is the only remaining bunker that is still intact, made into a museum just as the Germans left it with rooms full of equipment and maps. It has the claim to fame in our group in that Jim Clegg’s ship (HMS Frobisher) was the one that hit the top of the bunker on 6 June. It was not until 9 June that Lieutenant Bob Orrell of Royal Engineers was given orders to take the Bunker. Accompanied by three men, he placed two explosive charges one after the other to blow up the armour-plated door. It took four hours to break it open! The garrison of two officers and fifty men then surrendered and the liberation of Ouistreham was complete.

From here we travelled to Tilly-sur-Suelles which was not liberated until 19 June. In this small town (with a market on Sunday as we visited it) a statue of Joan of Arc survived the shelling of the church and is now sited in the grounds as a memorial. There is a story that Alan Johnson told that after Joan of Arc was burned at the stake, her heart was removed. After the church was bombed in 1944 her statue was found to have a piece of shrapnel embedded in the place where her heart would have been. 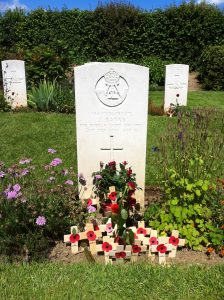 Jerusalem Cemetery is on the D7 between Tilly and Bayeux at Chouain and we go there on each pilgrimage because of the poignancy of those buried there. Father always puts crosses on the graves of the 2 army chaplains and the 16 year old Bolton lad is always commemorated. As we were leaving and the veterans were getting back on the coach there was a convoy procession of historical military vehicles driven by re-enactors (dare I tell you that our veterans call them Toy Soldiers?). When they spotted our veterans they saluted them – with horns sounding – and our veterans stood at the side of the road and saluted back. Jo remembers her Dad standing to attention saluting with his pipe in his mouth!

All good things come to an end. As always, this was an emotional visit, but more so since it was a significant anniversary – and so many of our group were there. I shall never forget the parade at Arromanches when the veterans marched into the square – in perfect time and turned to the left to salute. Not one of them was under 88 years of age and most in their 90s. Yet they still marched and moved in perfect drill time. I still have tears in my eyes as I remember it.

Veterans on the trip: 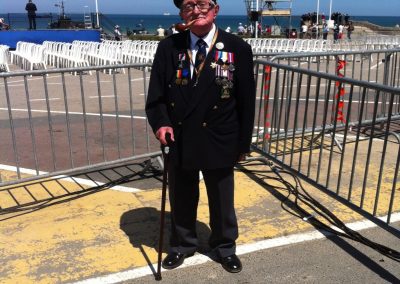 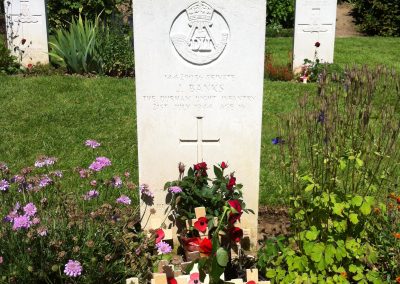 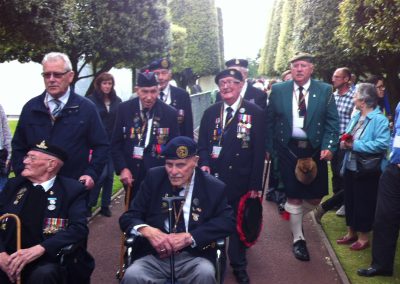 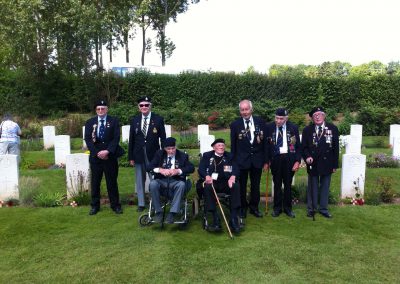 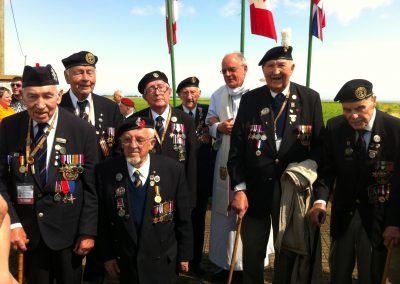 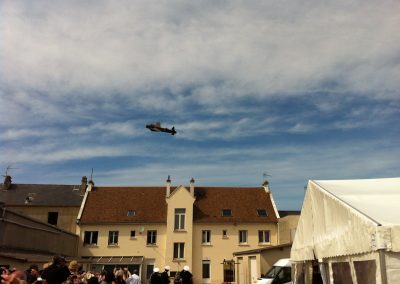 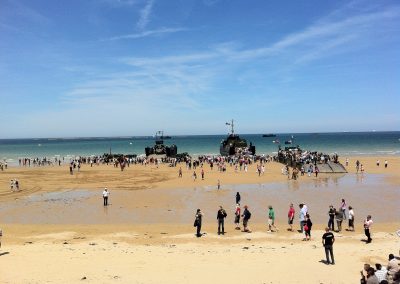 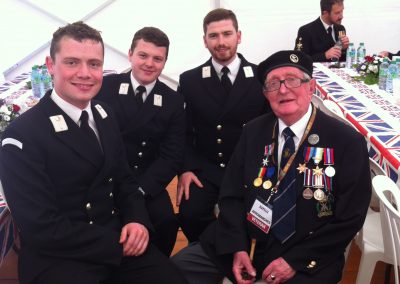 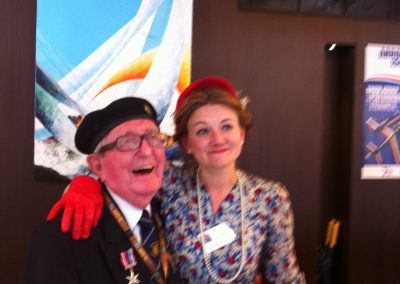 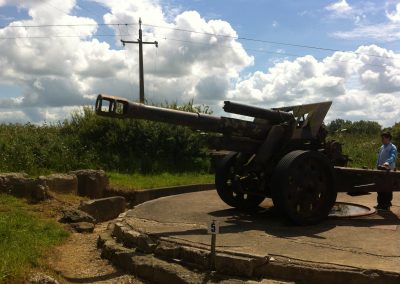 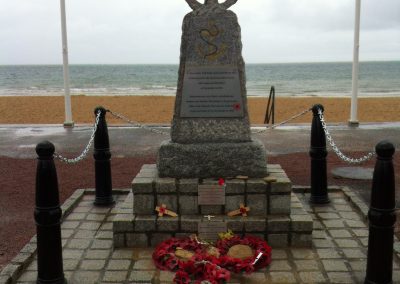 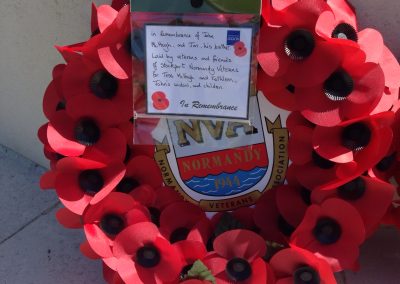 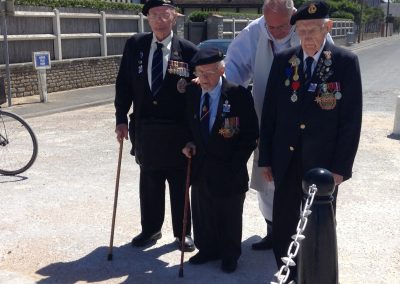 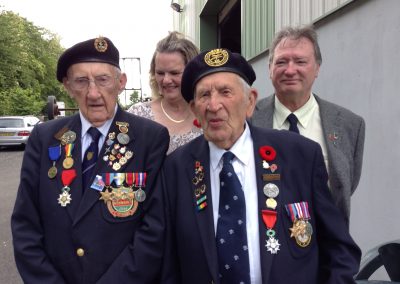 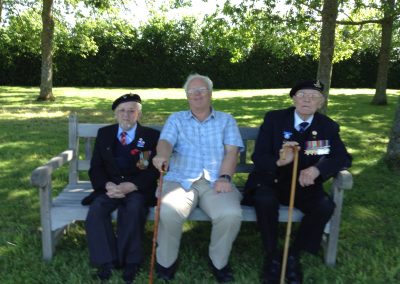 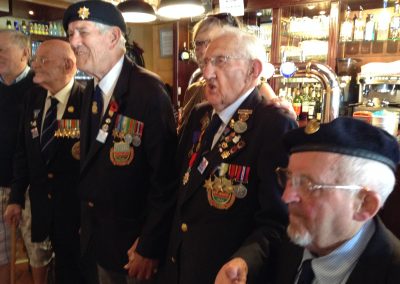 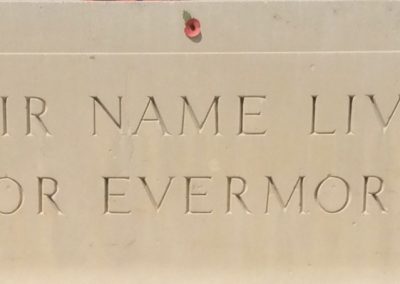 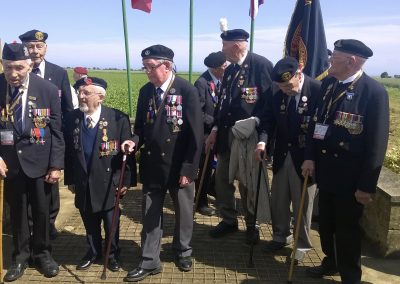